The DIDIER families from Beckerich, Luxembourg to Evanston, Illinois

This page outlines the origins, emigration, and life of the DIDIERs, but while researching, I found so many nice old maps. I have not listed their many descendents, because the information is preliminary, but please help if you have any information to share.

Pierre DIDIER was born 3 Nov 1765 in Wolkrange and moved to Calmus. His parents were Peter DIDIER and Maria DICKES. There were other Didiers living there too.  He married Anna Maria Feller, born 8 Apr 1771 in Calmus, and died 31 Jan 1832 in Calmus.

Buvange and the entire Arlon area were part of Luxembourg until the 1830 Treaty of London, when about half of Luxembourg was given to Belgium, although the transition took until 1839. It's now known as the Luxembourg Province of Belgium. Calmus and Beckerich remained part of the Grand Duchy of Luxembourg.

Map showing Udange, Wolkrange, and Arlon in Belgium, and Beckerich and Calmus in Luxembourg. The gray vertical line is the national border. Buvange is too close to Wolkrange to show here.

The four DIDIER brothers came from Beckerich, Luxembourg, and settled on farms in South Evanston, Illinois, between the present location of Howard St. and Mulford St., and between Asbury Ave. and Dodge Ave. They all had large families.

Peter DIDIER is buried in Iowa. John and Michael DIDIER and their four wives are all buried in St Henry's Church in Chicago. The Didiers all had very large families and there are many variations of family trees to be found, often containing errors.

The entire NE quarter of section 25 was purchased as a land grant by Edward A Mulford on March 10, 1843. There must have been a big land sale on that date. The table below shows certain original sales of lands from the Federal Government.

This series of maps focuses on Section 25 of Evanston Township, Cook County, Illinois. They also include the western half of Section 30 of fractional T 41N, R 14E, up to Ridge Avenue. Evanston Township was formerly known as Ridgeville Township.

Separate Plats of Sections 25 and 30 from an 1840 map. The diagonal "Indian Boundary Line" was negotiated in the 1816 Treaty of St. Louis between the United States and the Potawatomi Nation. It was the north boundary of a strip of land from Lake Michigan to the Illinois River, giving the United States the Chicago Portage for trade purposes. It was the link between the Great Lakes and the Mississippi River system. The Americans were already envisioning a canal between the two waterways, and the Potawatomi Nation accepted the loss of that land in exchange for peace in the remainder of their territory. This treaty line, shown on all the maps below, is now the location of Rogers Avenue. The US honored its treaty for just 18 years, and in 1834 the Indians were forced to give up the rest of their land, and were relocated to Iowa.

This map is from http://landplats.ilsos.net/FTP_Illinois.html, selected from hundreds of original Illinois township plats.

On the 1851 map, the 25 on the map marks the center of the section. No DIDIERs had arrived yet; in fact the area was populated only by Mulford, Phillips, and Marshall. The double line indicates the trail that is now Ridge Avenue.

The 1870 map shows that Nick and Mike have now each added about 20 acres west of Dodge Ave. These two parcels were contiguous. So at this point Nick has a total of 44 1/2 acres and Mike has 50. These newly acquired areas were formerly swamp land. At the lowest trough, four blocks further west, along what's now McCormick Blvd., there was a ditch that drained the swamp northward into the lake (see little diagonal line at top left.)

The original ditch site became a railroad line by 1890.

The North Shore Channel Project, constructed between 1907 and 1909, straightened and deepened the ditch to below the level of Lake Michigan. It was extended southward to the Chicago River. With its direction reversed, the canal now carries fresh lake water southward into the Chicago River system.

In contrast Ridge Ave. was a glacial moraine. Everything west of Wesley was originally forest land. (See green line on 1840 map.) During high-water times only Ridge Ave and Chicago Ave to the east (Clark Street in Chicago) were passable.

On the 1886 map Nicholas' 44 acres have not changed. But Mike's new 20 acre parcel has been divided, the 5 acres along Howard Street going to J Deider (that must be Johann DIDIER) and the 15 acres above it to Snydacker. In Mike's original 30 acres, the west 22 acre piece now shows two names: Snydacker and M Dieder. I don't know what it means for two names to be on one parcel.  And I don't know who Snydacker was.  I believe he was connected to Northwestern University.   And Mike's eastern 8 acres now bear the name N Brill.

Nicholas Brill was the father-in-law of Andreas Fuertsch, whose brother Joseph married Mike's daughter Mary Didier. Andreas had married Mary Brill in 1872. That could be how Fuertsch acquired the farm. I was surprised to see Brill's name on it all the way until 1898. Later Andreas' son Lorenz Fuertsch continued farming the land.

On the 1890 map, the situation was still the same, but this map is clearer. The diagonal line at top left is a railroad line.

1898 map. Situation still unchanged. Mike Didier's name still appears along with Snydacker, but at some point he lost the farm. Streets were often constructed along property lines. At least in the 1896, 1898, and 1901 city directories, Howard Street was known as Didier Avenue. 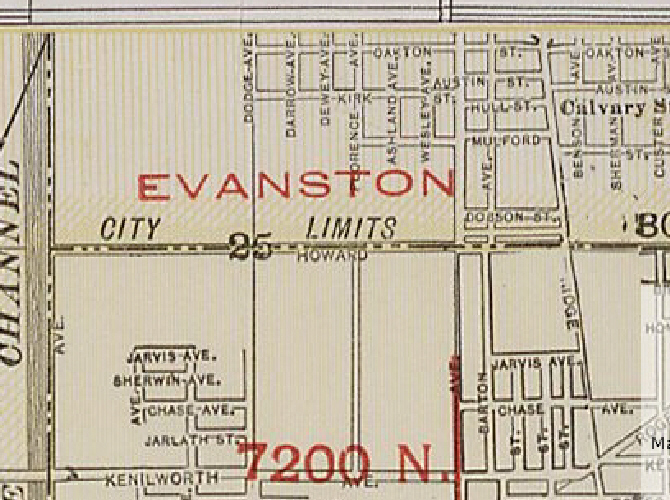 1921 map. This is from a 1921 Cram map showing how some of the streets filled in. Touhy Avenue was then called Kenilworth Ave.

2008 map B. Notice on what was formarly Nick's farm, the electric railroad built in the 1920s (The "Electroliner," later the "Skokie Swift," now the CTA Yellow Line.) This view also shows the North Shore Channel running north-south along McCormick Blvd.

2008 Map C with the 1886 property outlines and acreage superimposed

There were several Didier families around Udange and Beckerich. There were two other Didiers from Beckerich who turn up in Minnesota:

JP was likely the son of Michel.

There are still Kettel families in the Arlon area of eastern Belgium today.

There was a Mathias Kettel who arrived in New York 12 August 1833 with his father Peter Kettel (born 16 october 1796 at Habergy), his mother Marie Françoise Biloque (b. 18 December 1794 at Meix le Tige, Luxembourg, now Luxembourg Province, Belgium), and his sister Catherine Kettel (b. 23 July 1819 at Habergy). Mathias and his family went to Stark County, Ohio and about 1848 moved to Scott County, Missouri.

Sgt. KETTLE was 32 when he enlisted at Cape Girardeau on August 15, 1862.  He mustered in at Benton Barracks on September 18 as a Private in company F.  He was Regimental Teamster until he was promoted to 5th Sgt. on June 20, 1863. He was captured on November 27, 1863 at the Battle of Ringgold Gap, GA.  He died of pneumonia as a POW in Libby Prison, Richmond, VA.

Please email me if you have comments, corrections, or more information. If you're studying the same topics, it's likely I have more information that you could use. I'm especially interested in old pictures. There are pictures of John and Nick Didier, but none of Mike so far.